Ania Loomba is Catherine Bryson Professor of English at the University of Pennsylvania. She writes

Sign the “Open Letter” calling on the MLA membership to endorse a resolution in support of the boycott of Israeli academic institutions. Only the signatures of (former or current) MLA members will be included.

I urge you to support the MLA resolution in favor of the academic boycott of Israeli institutions. I recognize that many of you feel a boycott of Israel is an extreme step, and others may feel that it is likely to be ineffective, or that it is divisive for a body like the MLA to even discuss academic boycotts. Precisely the same arguments and hesitations accompanied the boycott of apartheid South Africa, and like that earlier movement, the BDS movement is not an attempt to muzzle academic or artistic freedom, or contact across borders, or a clampdown on individual rights, or an expression of anti-Semitism, as its opponents allege. On the contrary, it is a plea to recognize that intellectual, personal and religious freedoms simply cannot be exercised alongside the systematic brutalization of an entire people.

As teachers and students of literature we deal with the most controversial of issues, and we cannot shy away from this one. I teach and study histories of race and colonialism. It is impossible for me to do so and not see how Palestinians today are an unfree, colonized, and thoroughly oppressed people. END_OF_DOCUMENT_TOKEN_TO_BE_REPLACED

Tom Sperlinger, a Reader in English at Bristol University, has published an account of

the five months during which he taught literature at the Palestinian Al-Quds University, under conditions of occupation. His memoir Romeo and Juliet in Palestine chronicles the time he spent with Al-Quds students and faculty, and the difficulties he faced teaching English literature to Palestinians living under Israeli occupation. His memoir challenges those in the humanities who consider life in Palestine irrelevant to the kind of learning we undertake when we study literature.

His University of Bristol website, notes that “Romeo and Juliet in Palestine, was published by Zero Books in June 2015 and has been reviewed in The Observer, the Electronic Intifada and SCTIW Review. It is about a semester [Sperlinger] spent teaching at Al-Quds University in 2013.”  See the interview with Sperlinger about the book for the Bristol Festival of Ideas and for the Folha de S.Paulo newspaper in Brazil.” END_OF_DOCUMENT_TOKEN_TO_BE_REPLACED

For over a year, a growing number of students and faculty have become the target of the Canary Mission (CM), a clandestine organization that is devoted to monitoring and 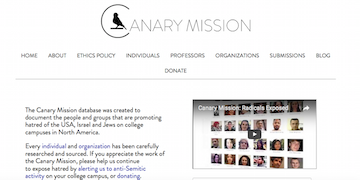 harassing anti-Zionist activists and critics of Israel on university campuses (see here and here and here and here for recent coverage).  The organization, which operates anonymously, has been linked to and endorsed by well-known defenders of Israel, such as David Horowitz and Daniel Pipes. Horowitz’s Freedom Center maintains the Discover the Network page which lists individuals, among them an odd assort of academics, on the ostensible American Left. Pipes is associated with the controversial 2002 Campus Watch blacklists. Akin to Campus Watch, which focused primarily on Middle East Studies scholars, who questioned US policy in the Bush era, Canary Mission project is both more specific and more general; it is more specific in its focus on campus critiques of Israel, but it is more general in not limiting the list to Middle East Studies scholars.

Canary Mission is nothing but a blacklist, pure and simple.

END_OF_DOCUMENT_TOKEN_TO_BE_REPLACED

Ben Ehrenreich is an independent journalist, whose varied writings include a prize-winning article on death in Los Angeles in the Los Angeles Magazine and the story behind the murder of the Salvadoran poet Roque Dalton.  Visit Ben Ehrenreich’s blog to follow his compelling coverage of stories that often do not appear in the mainstream press. In addition to his work as a  journalist, he is a creative writer, and has published two novels, The Suitors and Ether (City Lights 2011). 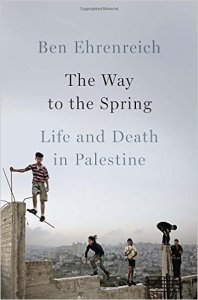 Ehrenreich has written for Harper’s Magazine on Israel’s water war against Palestine and this year published a new book, The Way to the Spring: Life and Death in Palestine (Penguin).

To listen to or download the podcast of the interview with Ben Ehrenreich who discusses with David Lloyd his new book on “life and death in Palestine,” click this link.

In early August, David Lloyd interviewed Ben Ehrenreich for the weekly SWANA (South and West Asia and North Africa) Collective radio show, which produces original programming for KPFK/Pacifica Radio 90.7 fm, Los Angeles. The discussion between Lloyd and Ehrenreich focuses on the current situation in Palestine-Israel, Palestinian resistance movements, the suspended peace talks, and prospects of the continuing Palestinian struggle against Israeli occupation and apartheid. The interview originally aired on August 1, 2016 and was produced by Nyma Ardilan.

The Movement for Black Lives (M4BL), a broad coalition of Black organizations, published

in early August a resolutely inspiring platform, bringing into clear focus some of the most urgent political issues of our era, from the criminalization of Blacks and immigrants to economic injustice to inequality in education to the militarization of US society. The M4BL policy platform represents without question the most far-reaching attempt in the 21st century to present the systemic nature of racial violence in the US, whose most spectacular and outrageous form finds expression in the police serial killing of Blacks, but which can be tracked to every sector of society. END_OF_DOCUMENT_TOKEN_TO_BE_REPLACED

In her recent essay for Social Justice, Sunaina Maira provides analysis of the importance of

academic boycott resolutions, both in their passage and in the spaces they create for dialogue, education, and democratization of the neoliberal university. She begins by noting, “Something unthinkable has happened in the United States in recent years: The boycott of Israeli academic institutions has expanded rapidly, with one major academic association after another endorsing the boycott or voting on boycott resolutions. Just as recently as in 2010, it was unimaginable for many, including Palestine solidarity activists and Palestinians themselves, that the academic boycott could win support in the United States. Our government, after all, is the most powerful ally of Israel and has provided unconditional military, political, and economic support to the Israeli state. Concomitantly, the issue of Palestinian liberation has historically been suppressed and subjected to censorship in the US academy and public sphere, representing what many describe as a new McCarthyism.” She goes on in this essay, found in full here to explore the significant role that the Palestine question and BDS have played in movements for social justice, and in challenging foundational colonial narratives. Maira also makes the case for the political principles that structure the boycott movement, and for the way it relies on autonomous grassroots mobilizing, done in solidarity with the Palestinian people.

She makes an argument that resolutions adopted by academic organizations are important not just for their outcomes, but because they create an important intellectual and political space, that contributes to the struggle to democratizing the neoliberal university. She concludes, “The boycott is thus central to the contemporary culture wars, and is an important site for academic activism and struggles for emancipation.”

As MLA Members for Justice in Palestine partake in this struggle with a boycott resolution—and build on the space for dialogue and education created by the Right to Enter Resolution passed at the 2014 Delegate Assembly—a resolution that received the majority of votes without reaching MLA’s required 10 percent threshold—Maira’s analysis of the importance of this campaign is timely and inspiring.